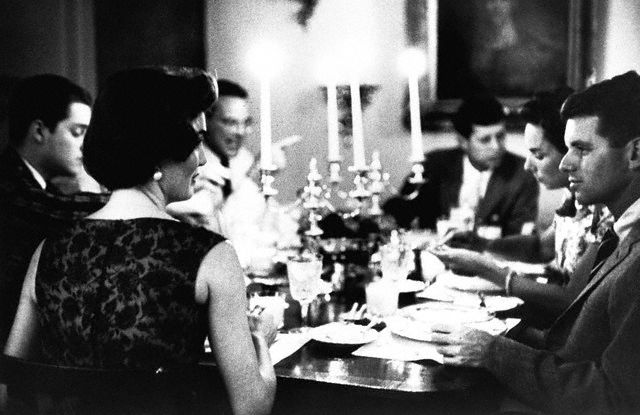 Talking.  It is not something we seem to do much anymore.  Yes, of course, we speak to each other, but we don’t have conversations with people.  Today, we seem to listen to respond, rather then listening to learn.  And for me that is sad.

Last month, I finished a book by Larry Tye about Bobbie Kennedy.  It was not only a fascinating read, but it a book that allowed me to better understand the growth and changes of a man that I have always admired.

One of the intriguing things I learned was that Kennedy had what he called “Intellectual Dinners”.  These dinners were attended by a people that held a variety of views from a disparate way of life and socioeconomic backgrounds.  During these conversations, RFK listened to viewpoints that helped him grow in his thinking and approach, that in later years shaped who he was and what he believed in.

With the divisiveness of our country today, it gave me the idea that no mater what we think and believe in, we need to do a better in understanding different thoughts, ideas and perspectives. And if I may say so, we all can broaden our thinking a little.

So with this in mind, we (my wonderful wife and I) invited 15 people to join us for what we called ‘Cocktail Conversations”.  Each of our guests came from a different background and viewpoint. A number had grown up in other countries. Some spoke two or three languages. Some were liberal, some were conservative. White, black, brown. All had one thing in common: they were smart and willing to listen to opposing thoughts.  In total, we covered 4 continents, 5 counties and 7 languages.

We didn’t ask people to come in black tie, as Bobby did; but we did ask that they wear business attire. Nor did we do a dinner.  Each guest simply brought an appetizer, we supplied refreshments (ie: wine and soda), and we sat comfortably in our living room.

While I knew we could not recreate what Kennedy started in the early 1960s, I did think we could have a conversation about areas that touched each of us.  With Bobby Kennedy in mind, the topic for the evening was “Poverty in America”.

I set some ground rules:

As the evening was approaching, my wife asked me what my goal was for that night. To be honest I didn’t have a specific one.  I was simply hopeful that hearing other points of view would allow us to broaden our understanding and serve those in the community that needed it most.

So was it a success? I think so. The best measure was when I glanced at my watch and saw that three hours had passed when it seemed like it has only been 20 minutes.

After the evening was over, I had three takeaways:

We plan on hosting another evening after the new year and can only hope that it will be as successful as this one was. The topic? Good question!  As I think through each area that would be interesting, I quickly see how they all lead to or from poverty. I am not an expert by any stretch of the imagination but I am leaning toward a topic of “Incarceration“. I can see how that topic, and how we determine justice, affects us all.

I do hope that RFK is smiling down on all of us as we remember him and draw from his actions to try and better the world that we live in today.

If I can be so bold, I would  encourage each of you to think about hosting your own Cocktail Conversations. I think you will find it is a fascinating experience and one that will surprise you with the results an what you will learn.

3 kids, 2 dogs and a picket fence. What more could I ask for?